Shopping Cart
Your Cart is Empty
Quantity:
Subtotal
Taxes
Shipping
Total
There was an error with PayPalClick here to try again

Thank you for your business!You should be receiving an order confirmation from Paypal shortly.Exit Shopping Cart

The Bath Grounds Heritage Trail comprises a series of heritage interpretation boards, numbered waymarkers and community created mosaics installed on a circular route around the Grounds.

The Heritage Trail provides an insight into the Bath Grounds’ fascinating past and present.

There are five interpretation boards. The largest board (right) is located near the South Street entrance to the Bath Grounds, at one end of the new Breedon Golden Amber footpath (You Are Here on the map). It introduces the Bath Grounds and their history with a map of the Trail and brief descriptions of the significant heritage buildings nearby.

This board is positioned close to a new mosaic, designed by local artist Di Lorriman and produced by mosaic artist Llynda Baugh. The mosaic depicts the magnificent Ivanhoe Spa building which used to stand nearby. The mosaic was unveiled by Ashby Mayor, Mike Ball during Ashby Arts Festival on 29th May 2016. It includes a tribute to the late Lorna Titley, Friends of Ashby Bath Grounds Committee member and author of "The Ballad of the Bath Grounds".

The history and architecture of the Ivanhoe Baths are described in detail on the second interpretation board (right) which is located along the new path. It describes the 19th century Spa experience and includes some gruesome details of the skin complaints that visitors sought to cure at the Baths. 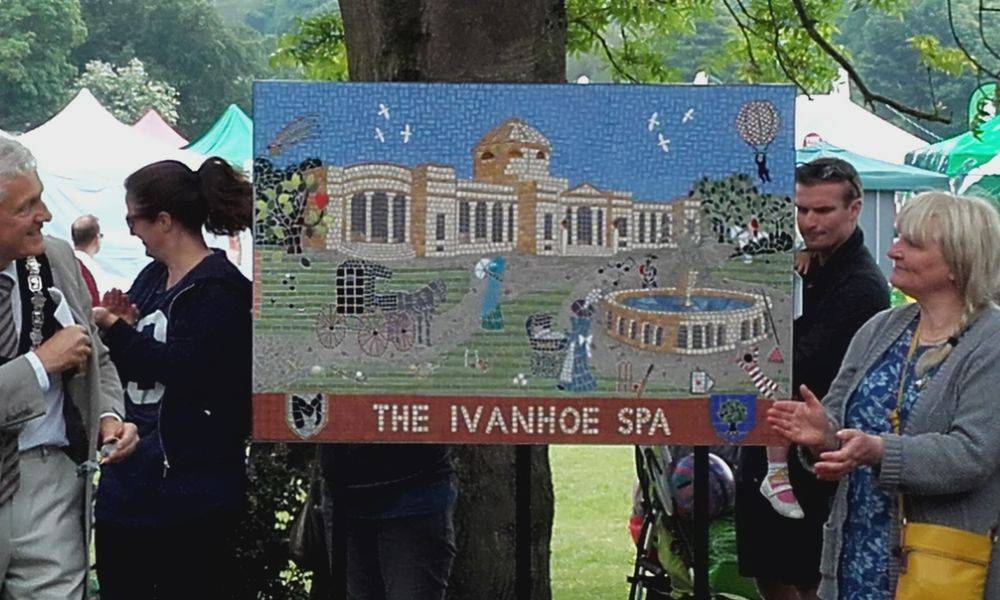 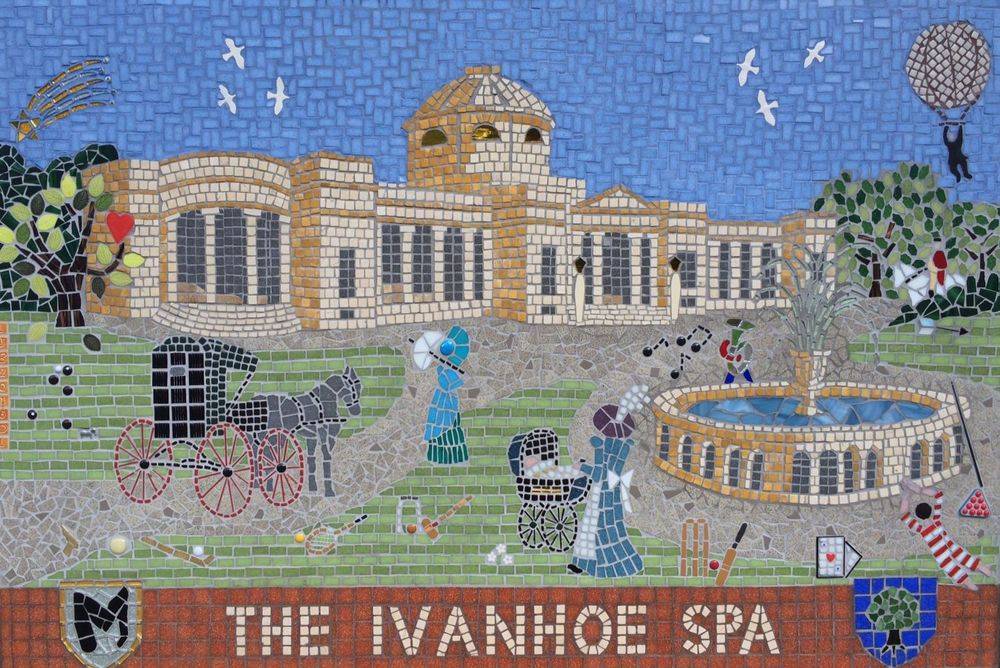 The third board (left), a little further along the path, covers the long history of community activities on the Bath Grounds over the last two centuries. It begins with the Picnic Parties organised by Thomas Cook as the highlight of his steam train excursions from Leicester in the 1850s. You can also find out about the fascinating life of Dolly Shepherd who, as a lady balloonist and parachutist, was a major attraction at events here during the Edwardian period.

Board 4 (left) is located at the Prior Park Road entrance and includes a map and introduction to the Bath Grounds for visitors entering from here. It also introduces the medieval Castle Fish Ponds which were located close to this spot. Nearby stands the second mosaic. This depicts three fish as an evocation of those ancient fishponds. It was designed by Di Lorriman and produced by Llynda Baugh with the help of two community mosaic workshops during the summer of 2016. It was unveiled by the Mayor on July 31st 2016.

Sports on the Bath Grounds is the subject of the fifth and final board which is located near the Cricket Pavilion. This board describes the numerous sporting activities hosted by the Bath Grounds over the last two centuries; including cricket, bowls, croquet, tennis, archery, hockey and football. It describes some of the memorable sporting events and achievements, such as the regular County cricket played here for many years.

There are also four waymarkers along the trail, marking locations of former and current features. The boards and Trail Guide describe these in more detail.